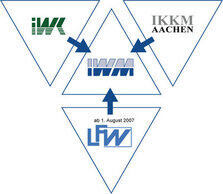 Copyright: © IWM Build up of the Institute for Materials Applications in Mechanical Engineering